In recent years, the stability of the drone has been improved dramatically, and it is now possible to record stable images with relatively good image quality even in low-cost models.
If it is simply that the image that looked down from a high place is necessary, it is enough that a total beginner can record with the drone that arrived yesterday. So why is a professional pilot required?

The drone that flies while checking the position with GPS does not mean that it will fly stably and fully automatically at any time anywhere.
Currently, drones are set to return to their starting point by default if they encounter problems with radio waves or batteries.
In addition to the thorough inspection of everyday equipment, we will also have a spare machine on standby at the site in case of any problems with the drones of precision machinery.

In addition to the certification of the Ministry of Land, Infrastructure, Transport, and tourism, the pilot who flies has an instructor qualification to guide students in various flight schools.

The best-in-class instructors are the flight operators and camera operators, and the standard is for the two pilots.
For example, if you have to capture the main character in the center of the screen for shooting or for the purpose of directing, such as turning around from the back of the model to the front from the side of the car, it is necessary to change the camera angle and move the drone at the same time. you will need to have a breath-taking operation with the two players.

Reason 4For the effective reflection of the directing intention

I think that shooting with a drone is a genre that is hard to imagine an angle even if it is set up by the person in charge of directing because it is a culture with a history that begins yet. For example, a crane shot can be easily created by Conte, but a three-dimensional drone is not. Even those of us who have taken in quite a scene can’t. Each time is a series of new discoveries. So, we have a small drone dedicated to the location hunting to help us build the image.
If you can experience the eye of the drone in the actual site and hope for the real, it seems that it will be possible to save considerable shooting time and expenses.

Reason 5As a challenge to new possibilities

There is a racing drone in the new drone genre, which was born two years ago. Our company collaborates with the Acro+, which produces the world championship Japan national team, and develops a racing drone for shooting. We achieved shooting at 160km / h.
The pilot is Japan’s representative of the world championship. This is the first time we have achieved a powerful shooting to drive a professional rider on the circuit.

Aerial photography by a drone has now become completely entrenched, and it has become essential for video production such as TV programs and CM.
As our business, we will not only provide stable images, but we would like to propose a camera work with a new drone-like no other so far.

An aerial drone is a type of drone equipped with more than 200g of high-performance cameras. Because the communication distance is long, it is ideal for when you want to take a vast view from a distance. It is recommended for those who want to take high-quality images and use them for video production.
From the compact “MAVIC” to the large-scale drones, we offer a wide range of aircraft.

Do you know the drone race?
The World Championships, which follow FAI rules, are being held, with the tricky course being raced at speeds of up to 250km/h.
The pilot will fly the designated course and pass the competition while checking the drone camera footage mounted on the drone with a monitor of the goggles. The drone currently used for aerial photography is designed with stability in mind, and no matter who controls it, it can capture images without shaking from the sky, but the drone of the race does not have self-sustaining stability.
Therefore, in order to control this drone, you will need the ability of exceptional conditioned reflexes.
With the help of this world championship pilot, we are now able to shoot in unprecedented ultra-high-speed range.
The normal speed of the drone is 40 km/h to 50 km/h, but by mounting the camera to the drone for the race of the top speed 170 km/h, it is possible to parallel shooting at 150 km/h.
In addition, since the drone for racing is originally small and lightweight, there is also an advantage that it is necessary to minimize damage even if you hit the shooting target.
The reference video is occupied driving on the circuit, but if the rider wearing a helmet and racing suits, there is no worry of damage at all. 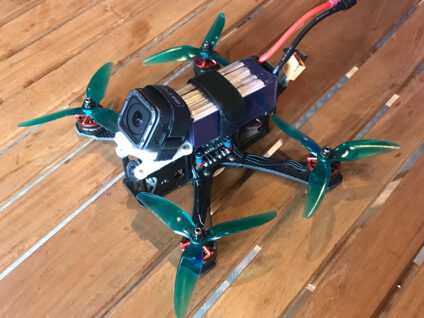 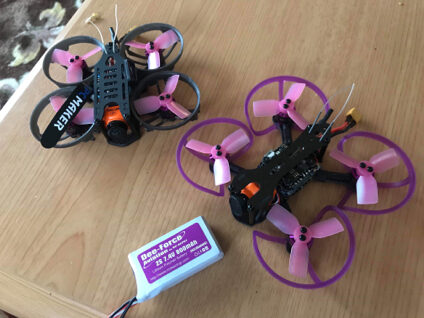 ●「Under the turquoise sky」 : 日仏蒙合作