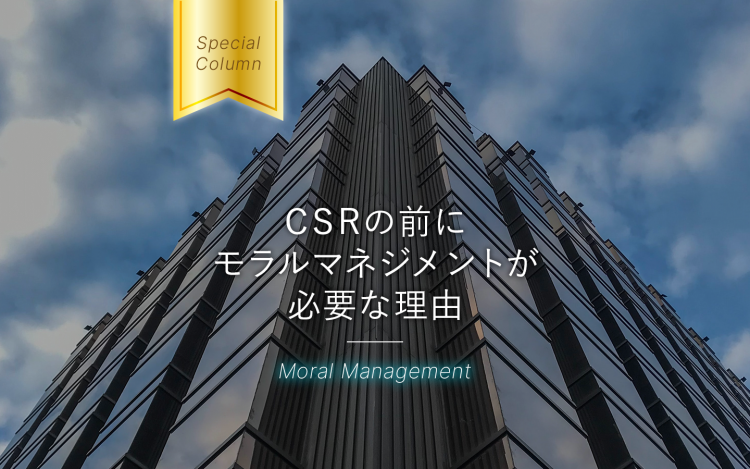 1 Prologue
2 Three cases I experienced.
2-1 ① What is the reason for the unpaid regret of a certain consulting company?
2-2 ②Plagiarism of copyright of a major printing company
2-3 ③ Subcontract Act and a certain conglomerate manufacturer
3 The fact that large companies commit illegal acts
4 The true brand power of a company without brand power
5 How to do moral management

From the past to the present, the loss of trust due to corporate scandals has led to a decline in the corporate brand, and in the worst case, corporate bankruptcies are still continuing.

Recently, it seems that corporate morals are being strengthened, such as strengthening CSR (corporate social responsibility) and formulating compliance.

There are many cases where I wonder if each company is really strengthening its morals.
Once again, I would like to ask the importance of moral management in this column.
※Many cases of corporate scandals and how to deal with them are posted on the website, so I will omit them here.

The three cases I’m about to introduce are actually what I’ve experienced within the last two years.

① What is the reason for the unpaid regret of a certain consulting company?

This is a case of a conglomerate consulting company.

We asked our producers to support the “business development of the consulting company itself”.

He wanted to remote the consulting service of the company.
We develop the system.

As the project progresses and before delivery

The person in charge contacted me and said that I couldn’t pay the work costs up to that point.
When asked why”While the project was in progress, I asked a credit bureau to do a credit bureau at the same time, and I got an NG.

There were many purchase orders, quotations, project progress emails, documents, etc., and even from a legal point of view, such remarks could only be heard as a child’s deception.

In the past, we’ve done the same thing, winning 100% in civil lawsuits, and I wasn’t upset at all.

We immediately contacted the consulting company and credit bureau from our lawyer.

The truth is immediately known.

In short, it seems that the person in charge of the consulting company had given up on this business development and proceeded with the departure.

The budget is not approved either Of course, we cannot pay to us. Therefore, I had no choice but to tell a lie.
Our lawyers are also criminal and civil cases such as defamation and unfair competition prevention law.

I passed the notification to the consulting company.

It goes without saying that the boss of the consulting company came to transfer and apologize to us on the same day after changing the blood phase.

However, since it is a consulting company that has a conglomerate name,I wondered what to do if we filed a proceeding and the information was released to the media.

Perhaps the loss was immeasurable, such as a significant drop in stock prices.

Is the education for the person in charge of the consulting company proper?
It was a case that thought about such a thing.

②Plagiarism of copyright of a major printing company

This case is a case of a major printing company.
We received a request from the company and made multiple proposals.
One is an exhibition.

It wasn’t a big budget, but it was still a competition, and I made a perspective for an IT company exhibition decoration.
We have created a proposal that summarizes other production plans and management plans.
After that, he was contacted and said that the competition was rejected.

One day I forgot about the competition, I went to an exhibition where our clients were exhibiting.
The exhibition was the same as the one proposed in the previous competition, and I thought so, so I went to see what kind of decoration the company proposed earlier had.
Then …

Design as seen somewhere.
Yes, it was exactly the same as the design we submitted.
It was a complete plagiarism.

Around the same time, it turned out that a copy of a convenience store campaign that we issued was also available.
A contact from our staff revealed the plagiarism.

Another plagiarism was discovered at the same time.
This printing company is big enough to do TV commercials,
When this fact becomes public,
This will also be a big problem.

What impressed me about this case was
Unlike the consulting company at the beginning,
The person in charge of each case was different.
This may be because the culture of the company itself already has a “plagiarism habit”.

I would like to introduce the case of the last conglomerate maker.
When I signed the outsourcing contract, I noticed something wrong with the contract.

If you do not observe this, you will be alerted as a fraudulent company on the website of the government office, so that certain conglomerate manufacturer will be posted.
Therefore, I made a certain conglomerate maker (thinking good and politely) to call attention and correct it.
However, the call came in with the boss angry.

“Every company is doing this on this payment site, what are you talking about now?”

“Oh, it’s better to check the subcontracting law, and if you keep doing this, your company will have a hard time.”

I was already amazed, so I didn’t get angry
We also had the next meeting, so

“Check it out anyway, then the story.”

said and then hung up the phone.

Then 10 minutes later He contacted me while I was traveling by train.
You can see the very apologetic attitude.

“I’m very sorry about that. I changed the payment site now.”

“Oh, if you understand it, that’s okay.”

“I think this person has taken the size of the company vertically and has threatened many companies,
I also remember that I was lonely, saying, “I haven’t been educated in legal knowledge.”

The above are some examples I have recently experienced, so
Not all big companies do this.

However, even from colleagues in the same industry
I have heard many cases like this.

So my impression isWhile big companies have brand power, they often think they are arrogant.
Since it’s a big company, do you think that anything is allowed?

But in reality The actions of those personnel are to lose the trust of customers and business partners.

It ’s an additional private case,The other day, I was contacted by a major cable TV company,
I was told that I needed to check the line in the apartment room.

If you do not check the entire line, the entire building will be inconvenienced.
In addition, it was requested by the condominium owner.
After that, a technician came to the room as scheduled.

I keep working He was checking the line in the room immediately,

I tried to open a new service on the way. I am,”Wait a minute, do you know that it is against the law to do business without notice?”

He didn’t seem to know, he had a blue face.
And when he returns”Actually, I’m a college student working part-time, and I’m thinking of joining this company. What do you think?”

I was surprised at the sudden question, but I answered:”I’m not sure about this company, but at least you should join a company that puts your customers first.”

I answered.However, even a major cable company

I hated this company in one shot to make college students do illegal acts.

The companies mentioned above are also engaged in branding activities such as TV commercials.
Of course, it is also a company that everyone knows.

However, the impression (brand) that these companies gave me was the worst.

Do they really understand branding?

At least, what is a true real corporate brand?

Large company, well-known company = brand power,not,,Even if it is not well-known, it has product and service capabilities, and is supported by customers and business partners = brand power.Isn’t it a company?

So what is the way to develop a true corporate brand?

I think the above-mentioned bad companies lack moral spirit before products and services.
There may also be a corporate culture that neglects the moral spirit.

How to do moral management

For a large company like the one above, compliance and CSR must exist.

Still, due to the absence of moral spirit Possibility of loss of corporate value due to scandals,They are also unaware of the decline in brand power.

I think that moral management will be essential for future companies.

Now, I would like to explain what companies should do and how to overcome it.
In fact, we are developing this moral management scheme.

At the next opportunity, I would like to introduce the methodology in this column.

There is a recommended method.

It is “to see and read Japanese folk tales.”Contains many theories that underlie moral management.(Half serious, half joking)