What is leadership that most presidents do not know? 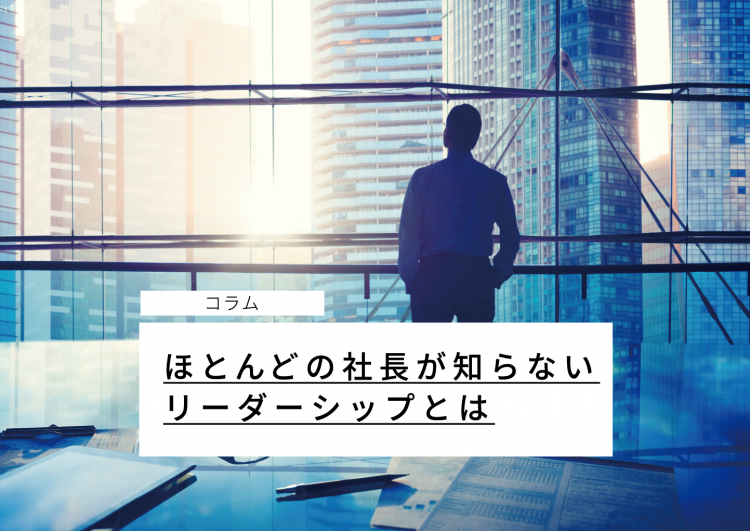 There are many research papers on the correlation between leadership and corporate performance. In our experience of corporate support, we sometimes realize that the ups and downs of a company have a considerable influence on the leadership of the president and department heads.

You need to look back on your leadership once again so that the good and bad of leadership is clearly reflected in your business performance.

First, the definition of leadership is given below. Quote: https://www.hito-link.jp/media/column/leadership Leadership is expressed as “leadership / leadership” and acts on individuals and teams to achieve certain goals. It is the power to encourage. There are three main points as follows.

・ Show a vision to achieve the goal

・ Encourage the staff to realize the vision while maintaining the motivation

・ Eliminate the problems in realizing the vision The power of the leader to achieve the result as a whole team It cannot be achieved by itself.

It is necessary for each member to have the ability to influence the surroundings and lead them to act independently as to how to act. Leadership has been advocated by various experts.

In particular, the leadership theory advocated by Peter Drucker, a well-known business scholar, states that leaders have nothing to do with charisma, but that people “follow” themselves. Drucker defines leadership using the terms “work, responsibility, and trust.”

One of the inspection methods where leadership works is the “employee engagement survey.” This survey will give high scores if leadership is functioning, such as whether you sympathize with the philosophy, how much your employees like and trust the company, and whether there is a move to eliminate organizational problems. It has become.

Companies with low scores have many organizational problems, such as employees not trusting the president and boss and receiving negative evaluations even if they do the right activities, resulting in poor performance and a low turnover rate. It’s getting higher. On the contrary, companies with high scores are in the opposite direction of the above.

Even if the services and products are good, when the organization begins to rot, the company will eventually decline. As you can see, the ups and downs of an organization are strongly influenced by leadership, but there are many cases where key leaders are not facing this issue.

Let me give you an example. As for a certain company, most of the mid-career employees in their 40s are companies with salaries of 200,000 yen, and the president comes to the company in a luxury car.

So, even if you talk about your company’s dreams, it’s no wonder that your employees are white. (Laughs) This case is a problem before leadership, but recently I think that the EQ * of leaders such as the president and department heads is low.

* EQ is an abbreviation of “Emotional Intelligence Quotient” and is a theory studied by American psychologists Peter Salovey and John Mayer in 1990. The word EQ itself first appeared in K’s Beasley’s dissertation. In Japanese, it is translated as “emotional intelligence quotient” and is said to be “ability to manage and use emotions well” in work and relationships.

The friction of the organization and the emotions of the employees that occur in the field are not visible.

There are reports from each of our teams that make us think so. I’m a little off the beaten track, but I hope everyone reading this column will know about some types of leadership that I recommend, “Servant Leadership.”

What is Servant Leadership?

Servant is a word that means “servant” or “servant.” In addition, it also means a leadership style that serves and supports the creation of an environment that maximizes the power of the members of the organization.

Instead of thinking of subordinates as being unable to do anything, we emphasize the vision of the organization, trusting and cooperating with subordinates, and promoting the growth of the entire organization.

Simply put, the idea is that the philosophy, vision, and strategic design are properly dropped from the leader to the employees, and when it comes to business, the leader is at the bottom and supports employees, business partners, and society.

What is the ideal leader in servant leadership?

What is the ideal leader in servant leadership? What a servant leader needs is a spirit of service. Believing that it is his responsibility to follow his conscience and lead to a better world, he manages the organization with his subordinates at the center.

Servant leaders value trust with those around them, listen to their subordinates, and work together to achieve their goals. The ideal leader is someone who is aware of the motivation of each member and can work to create an environment where even if they fail, they can turn it into learning.

The role of the servant leader

A leader’s major role in the theory of servant leadership is “service” to his subordinates and members. To do so, you need to have a spirit of service that is separate from your self-interest.

Reasons for attention in modern society

Possible reasons for this include the development of IT and the rapid expansion of globalization, in addition to the social trend that demands ethical trust from leaders from social unrest and corruption as in the United States.

In today’s world, where it’s imperative to keep up with the speed of business worldwide, it’s not enough for a single leader to manage everything and give support to its members. Therefore, it is necessary to demonstrate the power of the members, grow while producing results, and improve their performance.

It was thought that servant-like leaders were indispensable in an era when it was important for leaders to understand the characteristics and qualities of individuals and create an environment in which they could play an active role.

Why do Japanese companies have so much dominant leadership?

Leadership that has been mainstream in Japan has been called “dominant leadership.” This is a leadership image in which a leader sticks to his own way of thinking and values with a strong will and pulls his subordinates with strong leadership.

I used that power to give one-sided explanations and orders to the members and communicate with them.

Servant leadership was advocated by Robert K. Greenleaf in 1970, but only recently became known in Japan. With the drastic changes in the business environment and the demand for diversity in human resources, “servant leadership,” which can be said to be the opposite of conventional leadership, has been attracting attention.

The need for servant leadership in modern business

Servant leadership reverses the traditional organizational idea of “having subordinates for leaders” and states that “leaders exist to support subordinates.

” By respecting the independence of subordinates and practicing actions that serve the success and growth of their subordinates, bosses can change the behavior of members of the organization and improve their productivity.

The presence of leaders who listen to each member’s voice and respect their independence fosters relationships of trust and facilitates communication. And the motivation for the work of the members will increase.

The activities of servant leaders, who seem to be subordinates who want to follow this person, have become more prominent, and their value and necessity have been reaffirmed compared to traditional dominant leaders.

Here are some examples of successful implementations of servant leadership.

” Servant leadership has permeated as a company-wide culture. The reason is that it is the employees who are always in contact with the customer, and the idea that supporting the employee will prosper the company and shareholders and lead to customer satisfaction.

As a result, it became famous as the only American airline that was able to overcome the effects of the terrorist attacks without layoffs.

● Starbucks According to Howard Beher’s book, “The Important Principles That Starbucks Has Continued to Be the World’s No. 1”, which has grown Starbucks as a global coffee chain with its founder Howard Schultz as a director of Starbucks. Starbucks’ greatest value standard is “everyone is everything,” and “people who serve everyone are the most capable leaders.

” Servant leadership is the basis of this idea. In his book, Beher writes that half of the book’s sales will be donated to a laboratory that advocates servant leadership.

● US Air Force soldiers cannot fight together on the battlefield without mutual trust. It cannot be said that the operation will not work if the soldiers of his subordinates have a grudge, and in the worst case, even an ally can be shot from behind. For this reason, the United States Air Force has a culture that values ​​servant leadership, and that philosophy still maintains strong unity and cohesion based on trust.

● Shiseido Shiseido’s Morio Ikeda Advisor is a practitioner of servant leadership. Under the mission of “rebuilding the company” and “reborn as a new company,” he took office as president, and during his tenure, he undertook organizational reforms with “over-the-counter base” in mind.

He put servant leadership, which promotes an inverted pyramid organization that puts customers at the top, as a central concept of management, and he himself attended meetings of beauty consultants and sales staff and listened to the stories of field staff. ..

Therefore, he succeeded in numerous management reforms by utilizing the ideas obtained from what he saw and heard in measures and by making efforts to create an environment that makes it easier for employees to work.

“The important thing is to make employees understand the need and potential for change, set goals, and motivate them to take the initiative,” he said in his book. ..

● Ryohin Keikaku Mr. Tadamitsu Matsui, the former president of Ryohin Keikaku, which operates MUJI, is also one of the pioneers who adopted servant leadership. After taking office as president when his business performance plummeted, he had the opportunity to visit almost every store nationwide on his own foot and listen to the store manager and the story of the site. Based on the issues that emerged as a result of listening, he developed a manual called “MUJIGRAM” that visualizes work and a system that listens to the voices of field staff.

He is an example of practicing the “conceptualization” and “foresight” of the ten characteristics of servant leadership. After President Matsui took office in 2001, Ryohin Keikaku achieved a V-shaped recovery. Even now, sales and profits continue to increase.

● Daiei Next, I would like to introduce an example of Mr. Yasuyuki Higuchi, a former president of Daiei, a major supermarket. At that time, as a result of the deterioration of business performance due to top-down management, there were 50 stores that continued to be in the red and were decided to close. He went to all of the stores himself, explaining the reasons for the closure and thanking the employees for their work.

Then, the motivation of the staff of the target store is improved. Thanks to the efforts of each staff member, the “closed sales sale” was successful, and Daiei recorded a year-on-year increase in sales for the first time in 2 years and 4 months. Even after the store closed, the motivation of the staff who received the words directly from him was maintained. By actively working with the staff at the transfer destination, the company achieved year-on-year positive sales for the 11th consecutive month.

In order to be aware of each member’s motivation and work to create an environment where even if they fail, they can turn it into learning, so subordinates can concentrate on their work with peace of mind and act independently. We hope that you will refer to this column once again to confirm what kind of leader you are, and to make corrections in some cases. Sentence: Hiroshi Ashida

● The article in the column is scheduled for the 1st of every month. Column content scheduled to be released in May: “What is the next-generation partner company?”