What is a next-generation partner company? 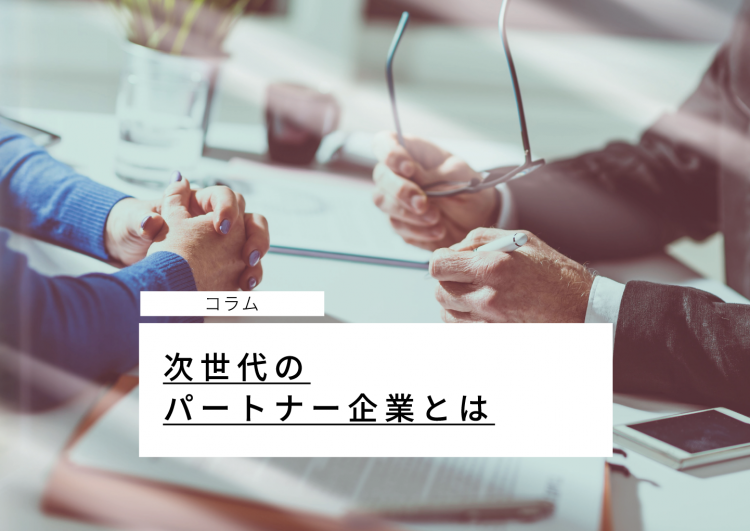 1 Choosing a partner company full of mistakes destroys the company
2 What is the actual situation of a consulting company?
3 The pain of advertising agencies
4 High failure rate of IT system implementation
5 What is a next-generation partner company?

Choosing a partner company full of mistakes destroys the company

I don’t even need to explain it now, but companies have several partner companies that support their management activities. For example, a consulting company that drafts and designs management strategies on behalf of companies, an advertising agency that works through advertising production for media such as TV commercials, newspapers, magazines, and the web for products and services of companies, core systems of companies, It is an IT vendor that builds IT infrastructure. In addition to partner companies, there are also partner companies that use their professional qualifications, such as tax accountants, lawyers, and patent attorneys, to support the management activities of companies from the side. What I would like to discuss here is the actual situation of partner companies and how to select them. The three most important are consulting companies, advertising agencies, and IT vendors. This is because these partner companies have a significant impact on the performance of the company depending on how they are involved. Top-notch companies with abundant funds have set up departments equivalent to these partner companies, scouted human resources, and secured them within the company. Still, for example, when you hit a commercial, you should be indebted to a major advertising agency. And most companies, except for “wealthy companies”, will ask the necessary partner companies according to budget, timing, issues, etc. However, partner companies do not have the absolute know-how of management strategies to support client companies. Still, why is it possible to exist as a strategic partner of a company? The reason for this is that partner companies aim to make profits only in the departments they are in charge of. As a brain, I can give some advice, but it is not the role of the partner company but the job of the manager to take a bird’s-eye view of the industry as a whole and formulate a management strategy. A well-known partner company attracts excellent human resources. Among them, major companies have a track record of making profits with the support of first-class companies, so newcomers form a “team” with their seniors to respond to the company’s demands. The education at that time is similar to the apprenticeship system of “stealing skills” like Japanese craftsmen, and it is quite difficult for one senior employee to train many juniors. What each company requires of these “teams” is different, so once we have a certain level of common know-how, all that remains is to achieve success in responding to the needs of the field. Although this process is repeated to increase the experience of each employee, it seems that they are not aiming to improve the skills of the company as a whole by sharing the know-how they have learned through horizontal connections. As a result, the quality of employees tends to vary. (Know-how becomes personal) I guess so.

What is the actual situation of a consulting company?

The pain of advertising agencies

In order to avoid such failures in IT solutions, it is desirable to appoint a consultant who understands the company’s needs and issues, understands the characteristics and programs of the IT vendor, and skillfully connects the two. Good consultants are not easy to find. There are increasing calls to reduce costs through the introduction of IT, but this is only possible if you can make full use of IT. What kind of choice you make here and how well you introduce IT will make the difference.

What is a next-generation partner company?

What did you think. Many doubts remain about whether the current business support of consulting companies, advertising agencies, etc. is sufficient for corporate support. In fact, all these partner companies can see a common management strategy policy. That is, (1) work segment (2) to improve hands-off. Certainly, in order to provide management support, all-round knowledge, experience, and know-how are required. There are many managers of partner companies who think that human resources are fluid and that employee education is not permanent, and that the training cost will be nothing. Therefore, it is “business segment” that enables education in a relatively short time. Also, if you pursue “good hands-on” while doing this segment, you will be able to pursue profits without spending time and money on education. If you choose such a partner company, it will only cost you money, and you will not be able to proceed with your work from a holistic perspective, so it will be difficult to achieve results. So which company should you choose?

(2) A partner company that focuses on human resource education. I would like to explain this point in detail, but this is the end of this column. Text: Hiroshi Ashida

●The column is scheduled for the 1st of every month. Column scheduled to be published in September: “Why IT Vendors Will Disappear Soon”