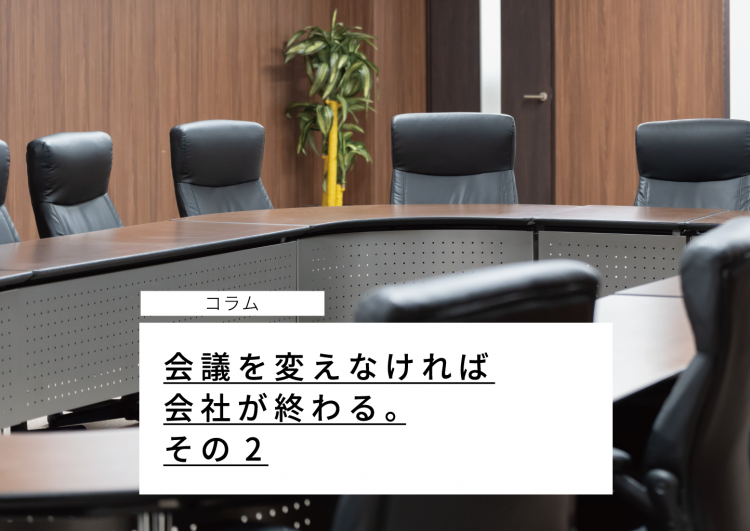 Three points to change the meeting

I told you that there is no future for a company that has such meetings.In this column,How to actually have a meeting ,.Here are three points that will change the meeting.

First of all, do you have a facilitator every time you have a meeting?

This column is not about facilitators, soIf you don’t know the facilitator, please see some sites.In particular, the following sites are explained in considerable detail.
https://jinjibu.jp/keyword/detl/32/

Just in case, I would like to introduce the role of the facilitator (in our opinion).

② Confirm the purpose, goal, and procedure of the meeting:
First, talk about the background of the project, the purpose, and the content to be decided.

③ Promote consensus building:
Draw out the opinions of participants and form consensus on the agenda.

I’ve seen many meetings,I have rarely seen a meeting with this facilitator or someone who seems to be a facilitator.As mentioned on the above site,The facilitator and the moderator are completely different things.

Facilitators are not qualified, soAnyone can study.

However, I think that facilitators also need considerable training and qualifications.

The upper management of the companyFirst, I learned the concept of facilitator,In addition, we found employees with facilitator qualities and found them.

And to study and train facilitatorsI am confident that it will be beneficial to the company.

Ancillary preparations for holding a meeting

The appointment of a facilitator will improve the quality of most meetings,If you hire a facilitator, that’s not the end.

After that, I will tell you the part that is not the role of the facilitator.

The selection of participants is very important.Surprisingly, there are many cases where participants are selected without much thought.There are various patterns in the election,I can’t tell you everything, so I’ll introduce two here.

① Whether or not the participants are valid participants
At daily meetingsI don’t speak much, or I speak only a word or two,Is there anyone who says that?Some companies are out of this.Many companies who cannot speak at a meeting will be excluded from the next meeting.(Especially in foreign-affiliated companies)It ’s easy when you think about it.If it doesn’t work at the meeting, it’s better to have other work done.”Because I’m a newcomer in training, I can’t help talking.

“”Because I had you participate for sharing” “Since I got a new project, I don’t have any information until I say something.”I think I can hear such a voice,That’s all an excuse.We are often newcomers to the meeting,I will let you participate in the meeting in anticipation of the perspective of being a newcomer.

From the training, teach the meaning of what you said at the meeting,I also train to speak.Also, participation for sharing,Or even if you just started a project There is no rule that no one has to speak.Rather, if there is little information, there must be positive questions.If you make such an excuse,Most of the time, I will find another reason and will not speak.

② Is the selection of people appropriate?
There are several types of meetings,For example, when brainstorming like an idea meeting,Some people only give negative opinions.People who give negative opinions have various psychology hidden in the background,In most cases I realized that I couldn’t come up with an idea By denying it, we are trying to show off our intellectual identity.
https://the5seconds.com/jinkaku-hitei-20028.html

In Brest Even if you come up with a novel ideaFinally, we also do a negative check.Participation of such people, participation at this negative check stage is okay,It would be wise to remove it at the breast stage.

People are said to have four types.The four are

① A controller that values ​​your standing position

④ Supporters who are happy to support people

④ Analyzer that feels the meaning of what is right
https://jinjibu.jp/keyword/detl/32/

At a meeting, the type of meeting and the selection of project members Not only each person’s experience, ability, and achievements SeveralType analysis (especially personality analysis) is required.

For example, in a project with many controllers, mutual fights and factions may occur.

In a project with many promoters, it’s just an assertion of one’s idea, and it doesn’t come together at all.

Have you ever witnessed such a meeting?

At the meeting Perform type analysis and psychological analysis of participating members,It is necessary to consider whether the combination is appropriate.

“As expected, the minutes are taken.”

It may be said, but surprisingly many are meetings (company) that do not take minutes.

In a company that does not take minutes,Sure, each person may be taking notes,In fact, this can be a problem if you take notes on individual interpretations of meeting decisions.

Because it cannot be described.Newcomers are more focused and more focused so they don’t miss out on the content of the meeting.At the same time, knowledge acquisition for work progresses rapidly.Of course, when the meeting is over, the degree of fatigue is very high, and it is very effective for new employee training.Also, creating minutes requires skill,Even if you are a newcomer, the way you organize will improve dramatically in a few years.

There is what is called the “Ebbinghaus forgetting curve” advocated by the German psychologist Hermann Ebbinghaus.

in this way,No matter how hot the meeting makes valid ideas and decisions,You forget about that content 74% in a day.Not leaving information in the minutes like this means
It is no exaggeration to say that the meeting is meaningless.Look back again,

How many meetings have taken minutes in the past week

Last but not least There are still many techniques to improve the meeting, but I will introduce only one for the convenience of the text.This is a technique that is not often introduced in facilitator techniques.Do you often see business owners who say this?

“Our company employees don’t comment or speak at meetings.”

There are several reasons for not commenting or speaking,There is a technique that makes you speak in one shot.

A long time ago, there was a president who spit out the above-mentioned lines as if he made a fool of an employee, so
Was I young too (laughs)

“Then, we will get 100 ideas from employees within 60 minutes.”
I declared.

“I wouldn’t have a hard time if I could do that.”

Said the president, but left. He asked me to come back in 60 minutes.

As a method,First, ask them to prepare multiple whiteboards or large-sized blank sheets.Then, the employees who had about 20 people were divided into 5 groups / 4 people each.Also decide the leader of each group.

Then ask them to resume the idea meeting.Ideas are written more and more on the whiteboard,I go around each group with progress support.

And an hour later, the president returned.

“Then, the president will present the ideas from the four groups.”

Make a presentation for each groupThere is also a rivalry with other groups, so The presentation is also incandescent.The contents were excellent, and the president was surprised.

“Why did you come up with this idea?”

After that, I explained the reason to the president.

“If there are a lot of people attending the meeting, when I speak, I think about responsibility and embarrassment. Also, isn’t the president always the last decision? This discourages me from coming up with ideas. That’s why I divided the groups into smaller groups, distributed responsibilities, and created an atmosphere that was easy to talk to. ”

The president couldn’t argue and had a bitter face (I’m more kind now, but lol)
It’s easy to hear, but surprisingly many companies don’t know this technique.

How was the way to improve the meeting?

How often do you use the items mentioned above at your company’s meetings?(I will summarize it again easily)

① Are you appointing or educating facilitators?

・ Implementation of ice break: Introducing participants and conducting intentional chats to make it easier to talk

・ Confirm the purpose, goal, and procedure of the meeting: First, talk about the background and purpose of the project and the content to be decided.

・ Promote consensus building: Draw out the opinions of participants and form consensus on the agenda.

・ Confirmation of task requests and implementation items for the next time

③ Do you know, study, or adopt meeting techniques?

Companies that don’t know how to meet like the ones above will lose their vitality.In fact, at the meetings I experienced, I rarely saw a company doing all of the above.
On the contrary, knowing and conducting a meeting method gives you a competitive advantage.We would appreciate it if you could reconsider the way your company’s meetings should be.

I still have a lot to tell about the meeting,I will conclude here in this column.

● Column articles are scheduled for the 1st of every month.

Scheduled to be released in March Column content: “Managers who do not know leadership methods”